This is harder than I had envisioned.  I forgot…there is no vegan fast food…it is either you cook it or is back to eating unwanted hormones, fat and all kinds of other unmentionable stuff.

The good thing is that when I cook, it lasts for at least three days…that’s the same thing that is not good…you eat the same thing for three days in a row.  I have been looking at recipes, because between my being lazy and not liking to cook and having to cook or starve, the option is obvious…I like to eat…a lot. 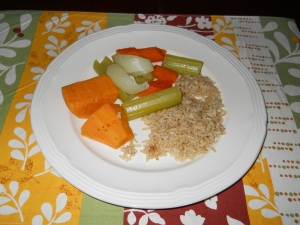 This was the end result of my steaming veggies and making brown rice.  It does not look that hot, does it?  But it keeps me chewing and fooling my stomach that something is going down the pipes to make it feel full.  I had some onions, for the first time in over 20 years, and they don’t taste that bad…it is the aftermath that made me be onion free zone again. 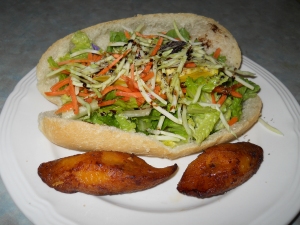 This was last Saturday’s lunch, after my French class.  Class went well…my aging neurons are somewhat slow to catch on, but it is only two students.  A young woman in her twenties and myself.  That’s where the problem may be.  She is fast and furious and I am slow and not so on the ball.  But, teacher is a nice young French woman and very understanding.  I think we covered half of the entire course just last Saturday.  Man, I am going to be fully fluent in French by probably next weekend, it she keeps the pace.  My brain may explode, but at least it will be pretty, in French.

I better hit the books and study.  I can not get younger and faster, but I can become a nerdy French student.  That will do.