This is as close as I am getting to a beach right now.  I love this painting because it gives me the feeling of peace, tranquility and serenity.  Same things, just sound different.  It is a big painting, that probably I will have to depart with because I won’t have any space for it in my new digs.  Two chairs, did you notice…, that was supposed to be Ron and me enjoying the sun at a beautiful beach somewhere in paradise.

I have been thinking about taking an European-style vacation.  Vacation in that continent, or most of the countries, is for 30 or 60 days.  Low productivity, but high yield in enjoyment of life.  We need to learn that art in the brave-new world.  Popping pills to calm stress has become our national emblem.  Need 30-days of relaxation, and chillin to recharge the depleted system, our fragile human body.

This translate to my being absent from entertaining you and myself with my interpretation of mundane things and making them sound interesting.

I need to give it some more thought.  Really, I am up to my eyeballs in packing boxes, getting stressed about having to depart with a lot of “our” stuff. 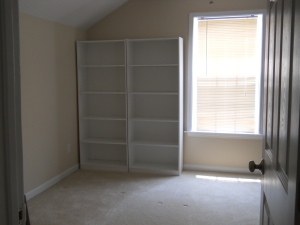 As you can see, things are just being packed or in boxes for the Salvation Army.  I feel sometimes a bit with “la depre” (down), because having to depart with stuff is harder than you can imagine.  But then I think about the lack of space I will have in my new apartment, and then is easier to let go.  Do not believe in renting space to put stuff.  A tightwad.  I love making my money go a long, long way.  Less stuff, easier to move and move again. 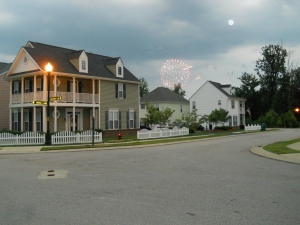 My neighborhood display of fireworks…I watched the fireworks from Charlotte, NC, Boston, New York, and Washington, D.C.  Love the Boston Pops with Keith Lockhart conducting.  1812 Overture, my favorite.  The ones from Washington, D.C. are majestic with the monuments as their background.  Unforgettable.  I felt as if I was there.

So it was today…4 July, 2011…celebrating another year of independence in our beloved country.

“I am a great believer in luck, and find the harder I work the more I have of it.”  Thomas Jefferson, principal author of the U.S. Declaration of Independence, 3rd President of the U.S., and an influential Founding Father.  13 April, 1743 – 4 July, 1826.