and sometimes we are the only keeper of that story.  I was thinking back when I bought this decoy.  It does not have any markings, it has seen better days, but it was my favorite among the three I purchased that day at an estate sale in Florida in the late 90’s.  There was a table full of them.  They seemed so beautiful and I was pulled to the table every so often.  I gravitated back and forth.  The owner of these decoys perceived my interest and came to me and told me I could have a discount if I decided to buy one or more.  I told him I would think about it.  At that time we used to own the bookstore, and my excuse to get them was for resale.  But I really liked them.

Have you had a moment such as the one described before?  What was the appeal of these decoys?  Maybe I thought the time and effort that went into making them, all hand-made and what was the person doing it thinking at that time.  You could tell they were made with love and care, because the surface is very smooth, except the one above.  I don’t know why I like it the best, maybe it was the primitiveness in that decoy.  Maybe it is a reflection of myself.  I have come a long way and I think I have some ways to go until I get that gentler and softer personality.  When my feathers won’t get ruffled just because.

These two have markings and I am sure they are more valuable.  They were made in the 40’s or 50’s according to the research I have made.

Back at the estate sale, finally I decided to get these three.  Ron was trying to make me see that the profit ratio was not worth the investment for resale purpose.  As usual, I didn’t say anything and I think he already knew that I was going to get them anyway.  I made the guy an offer for the trio and he upped it a bit, and all of us were happy.  Ron then said, because he didn’t like to spend money too much, “are you ready to leave, honey,” to which I responded “no, there a few more things I need to see.”   Then he took my precious decoys back to the car (he was very good at taking care of the merchandise, whatever it was we purchased), and then I made a few more selections of other items,  paid for them,  and we left.  When we got to the store, he was taking them out, and I asked him if we could enjoy them for a few days at home before selling them.  No problem, he said.

The few days went by and as you can tell, they never saw the lights of the bookstore.  There is something about these decoys that I cannot explain.  I have a indescribable attachment to them.  Could it be because I have made up a story in my mind about their peaceful appearance, and maybe because they remind me about a saying “peaceful and serene on the surface, but paddle like hell underneath.”  That’s what I call grace.  That’s it.  It is them portraying the picture of grace and peace.

Finally I figured it out after so many years.  Look around your surroundings and try to see the objects and people around you with a different approach.  You’ll be amazed at how the story is told, with new eyes. 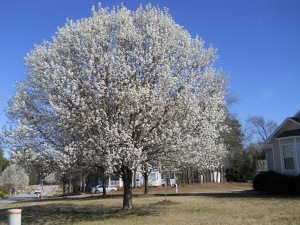 I will leave you again with another beautiful sight of the season, in Miss Raylene’s neighborhood, when we were walking this morning.  The beauty of nature always manages to take my breath away.  This is a pear tree in all its splendor.

You make it a happy one and continue to be alert for signs of beautiful things of the season.